Common Plants of the Kimberley

The Boab Tree by Pat Lowe

That 'colossus of the bush', the boab tree, has long intrigued visitors to the Kimberley. Where did it come from? How long does it live? With its strong branches and gnarled trunk, the boab is a minor ecosystem, providing shade and shelter for other lives. Native bees and bagmoths, lizards and nesting b irds, cattle and human beings, the boab embraces them all. Some aged boabs bear scars from long-past visitors: Aboriginal engravings, Muslim prayer alcoves, the name of a ship, the trace of an explorers' camp, a desperate message to absent comrades. Pat Lowe is a keen observer of the natural world. In this book she takes us through the science and history of the boab and into a realm of stories about the Kimberley's most beloved tree. ...Show more There Were Three Ships

From Clunes to the Kimberley In November 1864, three heavily laden ships sailed from Melbourne and its old sea port of Williamstown,bound for the land of promise They carried 120 men, women and children from gold mining and farming communities and thousands of head of livestock. Their destination, an isolated bay in the unexplored territory of far north western Australia But Utopia became a hell ...Show more The Natural World of the Kimberley

The Natural World of the Kimberley is a valuable addition to our knowledge and appreciation of the Kimberley's geology, environment, flora and fauna. This volume is essential reading for those living in or travelling through the Kimberley region The Kimberley's diverse habiitats support an astonishing variety of plants and animals, many of which are found nowhere else on earth. The Kimberley region of Western Australia is one of the world's last great wilderness areas. Covering more than 400,000 km2, it is home to some of the country's natural landmarks such as the Bungle Bungle Range, Geikie Gorge and Horizontal Falls Although the rugged and remote nature of the region offers some protection, they are still at risk from threats such as feral species, fire and climate change      ...Show more Birds of the Kimberley by Carolyn Thomson " ... far better than any novel; an incomparable record of a greart family and of a series of great actions. The Bulletin When Patrick Durack left Western Ireland for Australia in 1853, he was to found a pioneering dynasty and build a cattle empire across the great stretches of Australia. With a profoun d sense of family history, his grand-daughter, Mary Durack reconstructed the Durack saga - a story of intrepid men and ground-breaking adventure. This sweeping tale of Australia and Australians remains a classic nearly fifty years on." ...Show more 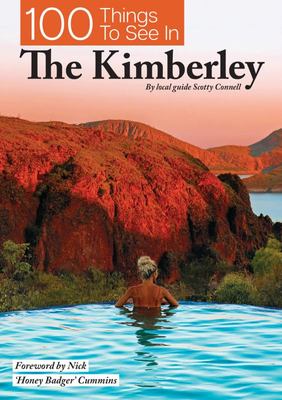 100 Things To See In The Kimberley by CONNELL SCOTTY

Scott Connell, local tour guide and administrator of the hugely popular @thekimberleyAustralia Instagram profile, shares his in-depth knowledge of the wild Kimberley region. In 100 Things to See in the Kimberley Scott guides readers through his 100 favourite places, telling them how to get there, why th ey should go and what secrets they'll uncover once they do. The book also includes full colour maps, stunning imagery and knowledge only a life-long local knows. ...Show more Freshwater Fishes of the Kimberley A Field Guide

The Kimberley region in north-western Australia is world renowned for its rugged natural beauty, remoteness, waterfalls, and Aboriginal culture. It is home to a rich array of animals and plants, including a large number found nowhere else on earth. The fish fauna is no exception, among whichare species that are culturally important such as the iconic Barramundi, a prized recreational and commercial species.Exciting  discoveries of new fish species continue in the region and this guide contains information on where the species occur, their evolutionary retationships, biology, conservation status, cultural values, and local language names.This compact volume contains full colour illustrations and information on the inland fish fauna from the Fitzroy River in the south-west to the Ord, Victoria and Fitzmaurice rivers to the east. ...Show more King Of The Australian Coast by Marsden Hordern

"Phillip Parker King has been described as the greatest of Australia s early marine surveyors. But while the achievements of Cook and Flinders are widely known, this is the first telling of King s story. Unlike Cook and Flinders, King was Australian-born--the son of Philip Gidley King, governor of New S outh Wales. In a series of gruelling voyages between 1817 and 1822, King charted most of the north-west coast of Australia from the eastern tip of Arnhem Land all the way round to Cape Leeuwin and King George Sound. He surveyed Macquarie Harbour in Van Diemen s Land and the treacherous waters inside the Great Barrier Reef, filling gaps in the work of his famous predecessors. Marsden Hordern, a splendid storyteller, creates for the reader a sense of following, engrossed, in King s wake. The hazards of reefs, shoals and tides are ever-present, as is delight in unfamiliar wildlife and curiosity about the Aboriginal people. The question left hanging is whether King might be better known today had he been a less capable, good and faithful servant of the Crown, and more inclined to the excess and ineptitude of certain other early explorers. Winner of the New ...Show more